Last summer, an interesting thing happened on a field of turf north of Toronto. The grower was testing a new soil amendment as a source of calcium, magnesium, and plant-available silicon. Research indicated it could lead to healthier, more disease-resistant grass. Sure enough, the grass on the test area grew better –  so much better that the grower had to dig deeper to find out what was going on. To their surprise, the soil under the treated area was free of the white grubs that were feeding on the roots of nearby grass, stunting its growth.

White grubs are the larval stage of a number of species of beetles. Although grass roots are their preferred food source, grubs feed on the roots of a number of plants, including corn, soybeans, legumes, and cereals. Depending on the species, grubs remain in the soil for one to three years. At elevated populations, grubs stunt, weaken, and delay plant growth and can even kill young seedlings or plants experiencing other stresses (i.e. drought).

“Could it be the soil amendment?” they wondered. Collecting some grubs, they exposed them directly to the material. Within minutes, something about the mineral literally made the grubs curl up and die.

The mineral was wollastonite from Canadian Wollastonite, a newly opened mine in Kingston, Ontario.

Repeated trials last summer and research over the past few months has started to confirm what was happening to those grubs. In technical terms, wollastonite has an acicular crystal structure at the microscopic level. Acicular means “shaped like a needle.” When grubs come into contact with wollastonite, its needle-like crystals pierce and lacerate their soft bodies, leading to desiccation (drying out) and death. 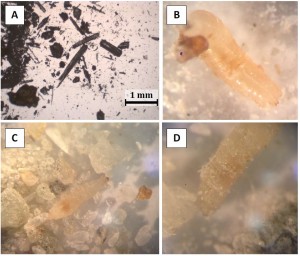 Electron microscope images show the needle-like crystals of wollastonite and its effect on larva.

This type of pest control action is well-known in the case of diatomaceous earth (DE), which is used to control insects on plants and in stored grains. However, DE also absorbs water quickly, which softens its edges and makes it less effective. Wollastonite stays “sharp” in moist conditions, making it an ideal addition to soils.

More turf managers and homeowners are starting to experiment with wollastonite. It’s beginning to appear that the wollastonite crystals even discourage the digging activity of raccoons and skunks who are well-known for tearing up lawns in search of grubs.

With increasing concerns about the impact of pesticides on our environment and on pollinators in particular, everyone from farmers to homeowners are looking for more natural, less risky ways to keep their fields and lawns healthy and productive. Stay tuned for more research and reports on the potential for Canadian Wollastonite to help reach these goals.