Can wollastonite release silicon in water?

This report is about as readable as science gets. In only a few pages, it provides a straightforward explanation, with simple experiments, of the availability of silicon in our wollastonite in solution and soil. Some of the language and detail may slow you down but they are the backbone of credibility when it comes to testing product effectiveness. 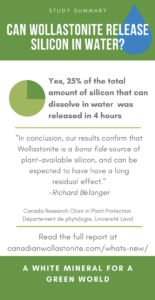 Summary quoted from the study:

“In this study, we evaluated the water solubility of Wollastonite, the only naturally occurring mineral-rich in silicon, in terms of silicic acid, also known as plant-available silicon, and how plants responded to silicon fertilization in terms of silicon accumulation. For this purpose, two formulations of Wollastonite, coarse and fine, were tested, as previous results indicate that fine formulations should release more silicic acid because of the greater surface area being exposed to solvents.

In the first experiment aimed at assessing the water solubility of Wollastonite, the results showed first that Wollastonite did indeed release silicic acid in water after a brief % Si in soybean first leaves extraction (4 h). Interestingly, it was shown that a fine formulation released on average 4 times more silicic acid than a coarse one. We found on average 0.39 mM Si in the solution, which, in the limited period of time tested, corresponds to 1⁄4 of the maximum solubility. However, the coarse formulation still released nearly 0.1 mM in this short period of extraction. Considering the high residual expected effect, this indicates that Wollastonite, both in coarse and fine formulation can significantly increase the amount of plant-available Si when applied as a fertilizer.

In conclusion, our results confirm that Wollastonite is a bona fide source of plant-available silicon, and can be expected to have had a long residual effect. When used as a fertilizer, Wollastonite significantly increases the percent silicon absorbed by plants, and as a consequence should help plants better tolerate different stresses owing to the intrinsic properties of silicon.”