Fresh off the press, this study makes the case that microbes play an important role in accelerated weathering reactions, the same reactions that are spurred on when wollastonite is spread on the soil.  Accelerated weathering is the breakdown of the silicate minerals in the soil creating carbonates, calcium carbonate in the case of wollastonite. Calcium carbonate is one of the main minerals that can store carbon permanently in the soil, groundwater, and oceans. This reaction and the minerals that are created are the same processes that formed all of the limestone on earth.

Do microbes play a role? We think these researchers are on the money. Research we support shows (and referred to in detail in this study) the importance of microbes in accelerated weathering of CW Grow. In a study at Guelph University, bean plants increased carbon sequestration in the soil considerably. The research suggested nitrogen-fixing plants release a large number of acidic root exudates into the soil which further accelerated the mineral weathering. Nitrogen is fixed inside root nodules by rhizobium bacteria in a synergistic relationship between plant and microbe. So, while these microbes are not directly in the soil, they are nearby and playing a key role.

The acidity in the rain and exudates that roots release into the soil directly, supply significant amounts of carbon in acids that drive the reaction. We are interested to learn more about the extent that soil-based microbes are involved.

Mineral forms of carbon are proving to be much more reliable long-term stores for atmospheric carbon dioxide than organic forms of carbon in soil organic matter. But all silicates are not created equal. Wollastonite (the mineral in CW Grow) consistently shows the highest rate and efficiency of reactivity for chemical and biological weathering to sequester carbon dioxide for permanent storage. 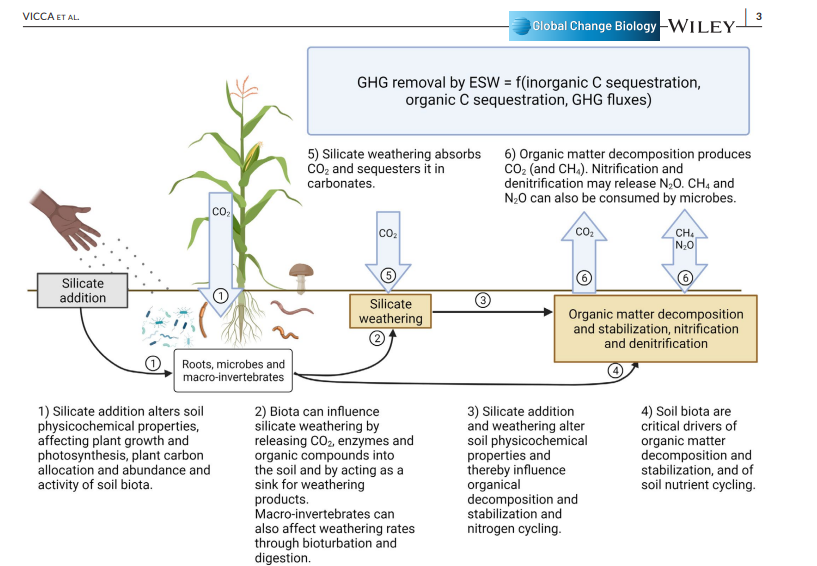